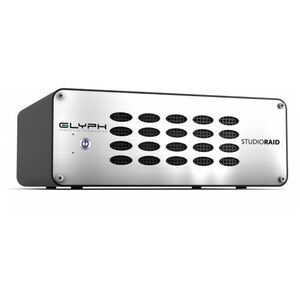 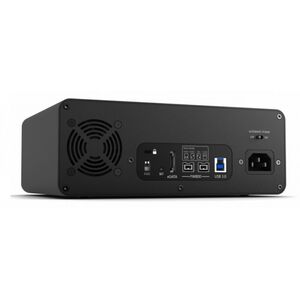 Powerful Desktop Performance
The Glyph StudioRAID is a high performance, ultra-reliable hardware RAID with USB 3.0, Firewire 800, and eSATA connectivity. Whether you need extra speed to edit or a redundant copy to reduce risk of loss, StudioRAID is your answer.

Professional Power
Glyph StudioRAID has a professional-grade internal power supply. This means just a standard IEC plug from the device to the outlet. No wall wart, and most importantly the power supply is kept cool and protected inside the enclosure.

Enterprise Class
Up to 32TB of fast 7,200 RPM, Enterprise Class hard drives, with speeds up to 360 MB/s. Glyph StudioRAID is built for demanding workflows and mission critical projects. *

Hardware RAID
StudioRAID supports hardware RAID 0, 1, JBOD, and SPAN. Giving you the flexibility to set it up optimally for your particular workflow.

Triple Threat
Glyph StudioRAID is the original triple interface storage solution. Choose which port suits your needs best, whether connecting to a modern computer or niche audio or photo equipment, Glyph StudioRAID has you covered.

Stay Cool Under Pressure
Don't be afraid to put the Glyph StudioRAID to work. The industrial aluminum enclosure is actively cooled by a temperature controlled fan keeping the internal hard drive and power supply at their optimal temperature to deliver higher sustained speeds.

Production-Grade Storage
Glyph has been in the storage game for over 29 years and trusted by creative professionals around the globe. Whether you are a filmmaker, photographer, or aspiring music producer, you can trust Glyph when it matters most.